If you have ever driven on Carroll Boulevard on the way to the University of North Texas, you may have passed a cemetery titled “I.O.O.F.” This title has most likely left you wondering, “what do these letters mean?” or “why does a cemetery, of all things, have a name like this?” If this acronym has you stumped, you are not alone, and the Denton County Office of History and Culture is here to help! This week’s blog will not only explain what these letters mean, but it will also highlight a special group that plays a key role in Denton’s history. 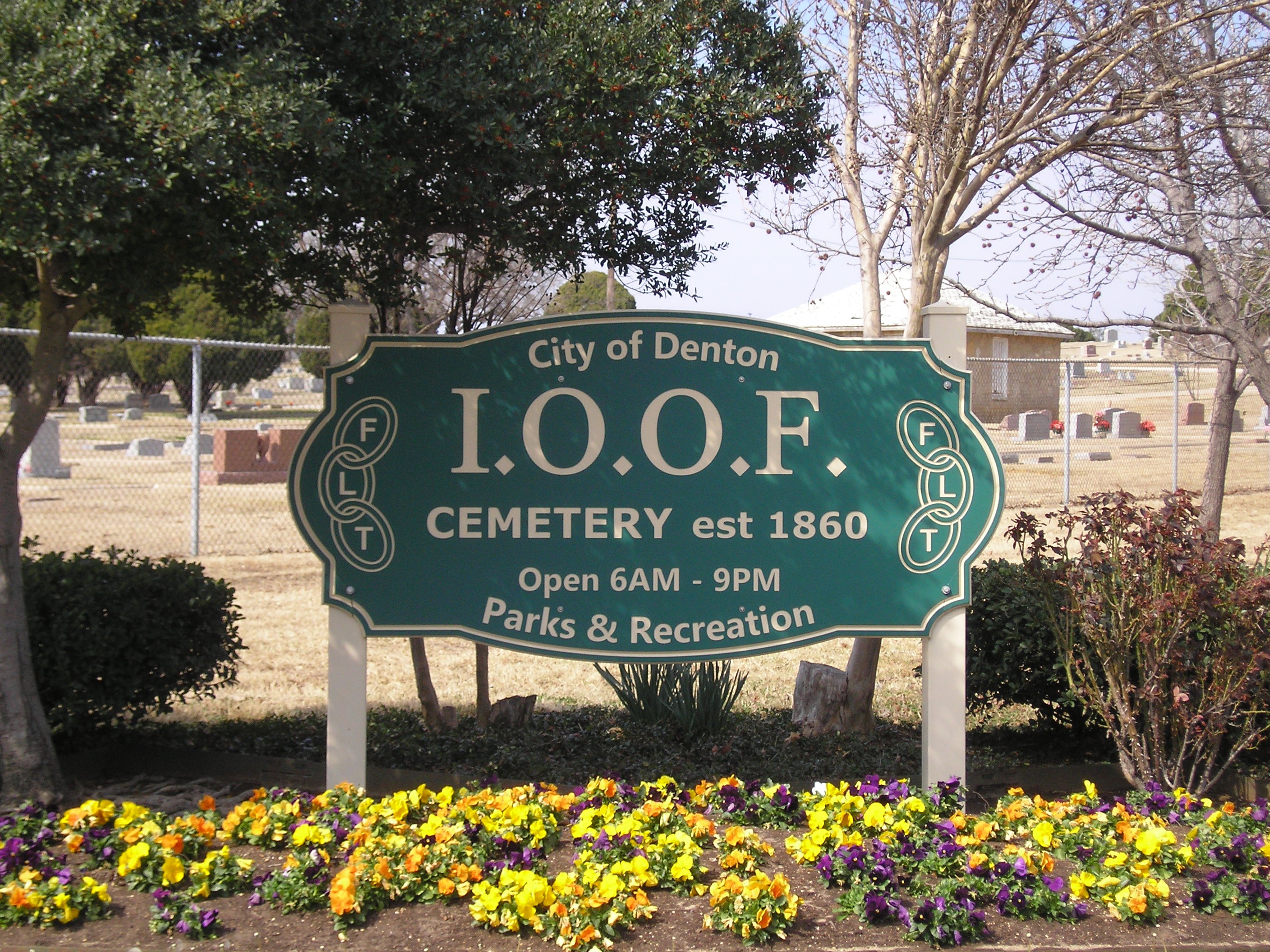 IOOF stands for the “Independent Order of Odd Fellows.” It is a fraternal organization that started out in London, England in 1748. The order came to America, first in Baltimore, MD, in 1819. It took almost almost twenty years for the IOOF to make its way to Texas, and Denton’s own chapter was finally founded in 1859.

This organization’s motto is “friendship, love, and truth,” and the group’s mission is to promote the “elevation of mankind’s character.” Each chapter of this order is dedicated to participating in local service projects while facilitating a sense of brotherhood and camaraderie among the community it serves.

Famous historical figures have served in this international order–Ulysses S. Grant and Franklin D. Roosevelt, for example. Several prominent figures of Denton County have also served in Denton’s IOOF chapter, including Otis G. Welch, one of the founding members of the county, and Joseph A. Carroll, a former Denton County judge and once an active member of Denton’s public sphere. In 1851, IOOF member Schuyler Colfax founded an order especially for women known as the Rebekahs; Denton includes an active branch of the Rebekahs in its chapter of the IOOF.

The 2018 Rebekahs of Denton County (http://iooftxdenton82.weebly.com/rebekahs.html)

The cemetery off Carroll Blvd. is one of the IOOF’s most special contributions to Denton. In approximately 1859, James A. Smoot, a member of Denton’s IOOF, donated a plot of land specifically for the building of the cemetery. The men and women’s branches of the IOOF actively serviced this cemetery. The Rebekahs held fundraisers and planned “decoration days” for the citizens of Denton to participate in, and the Odd Fellows kept track of funding and upkeep.

Photograph of the IOOF Cemetery circa 1960s

The cemetery, however, continued to expand, and available land became more and more scarce overtime. The upkeep of the cemetery also became less manageable as it rapidly grew. Eventually, in 1933, the IOOF decided to hand over the deed of the cemetery to the City of Denton, and today the cemetery is still under the care of the city’s parks and recreation department.

Although the cemetery is no longer under the IOOF’s care, their contributions to the cemetery have served Denton immensely. This order’s cemetery project exemplifies the IOOF’s values of “elevating mankind’s character” by creating a space to remember and honor the people of Denton who have passed.

The IOOF of Denton still still actively serves the Denton community today through various service projects. The order meets on the first and third Thursday of every month. More information can be found on their website: http://iooftxdenton82.weebly.com/

Access to the IOOF Cemetery Records can be found at the following link or in the Research Room at the Courthouse on the Square: http://teafor2.com/AW/index.php?content=acemetery&cemID=168

Information for this blog came from the following resources:

5 thoughts on “The IOOF Cemetery and Its Founders”